WITH a good pair of binoculars on a clear day, from just about anywhere along the Costa del Sol, you can make out the outline of Parsley Island.

It lies about 300 metres off the coast of Morocco and about 13 kilometres directly across the Iberian Peninsula. It is populated solely by lizards, bugs, nesting birds and goats.

Yet in 2002 this island was the focal point of a confrontation between Spain and Morocco that quickly reverberated throughout the world. The turn of events fits the clinical definition of a tragic-comedy—only with less of the former and more of the latter.

It is an overstatement to refer to this episode as ‘The Battle of Parsley Island’. It was hardly ‘battle’ in that not a shot was fired and there were no fatalities.

In fact to call it an ‘island’ is a stretch. It is more like a pile of rocks about the size of a rugby field.  Furthermore, there’s hardly any parsley on it – just ask the Moroccan goat-herder Ramji Lachili (more about her later).

In July 2002, tensions rose as six Moroccan soldiers landed (via row-boats) on the island ostensibly to monitor illegal immigration and the drug trade endemic the Straits of Gibraltar.

Armed with a few rifles and a radio, the Moroccans set up camp (it consisted of two tents) and haphazardly raised the Moroccan flag. Meanwhile, a Spanish Guardia Civil patrol boat on a routine mission from Ceuta (5km away), noticed the flag and disembarked to investigate. 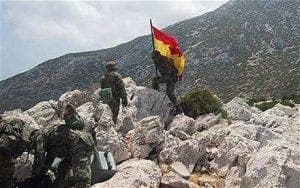 Turned away at gunpoint, the crew returned to Ceuta and reported the incident.

In a flash, the incident took on a life of its own. The Spanish media – namely El Mundo – raged that ‘the King of Morocco had chosen a path of confrontation with one of the great European democracies and this should have serious consequences for him’.

They were quick to publish a poll that showed one in five voters wanted the island stormed by Spanish commandos. Spanish radio stations were inundated with call-ins demanding the Moroccans ‘be driven back into the sea.’

Mariano Rajoy, then deputy Prime Minister, called the occupation of Parsley Island ‘incomprehensible and an act of hostility.’
The response (or lack thereof) from the Moroccan government was one of comical indifference.

As these events were taking place, Morocco was preoccupied with a three-week festival celebrating the marriage of the popular King Mohammed VI. Street parties, feasting, music and dance were just some of the lavish celebrations throughout Morocco.

Three hundred other couples in the Kingdom married in public weddings to honour their king. The royal guest list numbered close to two thousand. Former US President Bill Clinton and daughter Chelsea were personal guests at the royal palace. 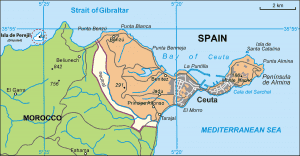 The Spanish air force deployed F-18 and Mirage F-1 fighters to provide air cover for the 28 Special Forces commandos who stormed ashore in Cougar helicopters. Within a matter of minutes all of the Moroccans were taken prisoners and the island was ‘secured.’ Taken to Guardia Civil headquarters in Ceuta, the ‘combatants’ were promptly escorted to the Moroccan border outside of town and released unharmed.

Mission Accomplished? Hardly – ‘The Battle of Parsley Island’ misunderstanding did not go unnoticed internationally. Quite the contrary. The European Union met and unanimously supported Spain’s objectives labeling the incident as the first military invasion of western European soil since World War II.

The Arab League issued a statement claiming that Parsley Island, like Ceuta and Melilla fell under the jurisdiction of Morocco.

NATO publicly acknowledged that technically the island belongs to an area under their protectorate. In the US, Secretary of State Colin Powell became involved in ‘intensive mediation’ in an effort to ease the tensions of the contested island.

Powell was quick to stress the importance of the US/Spain NATO alliance but also to acknowledge the long-standing good relations with the moderate Arab state Morocco. He proceeded to make personal telephone contacts with both foreign leaders in hopes of returning the island to what it was before the ‘misunderstanding’.

The Battle of Parsley Island is an example of a geopolitical incident that took on a dimension amplified far beyond the reality of the situation. The overreaction of Spain and the under reaction of Morocco had all the elements of a tragic-comedy. Perhaps the experience of Ramja Lachili, a Moroccan goat herder is the best example of this. 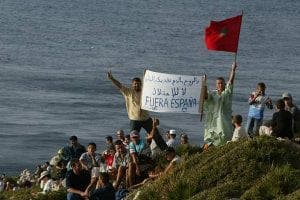 Not long after the ‘battle’, Lachili demanded compensation from Spain claiming that the invading Spanish troops either shot four of her goats in retaliation for her country’s invasion or, that the helicopters that landed on the island simply frightened her goats to death.

Spain’s defense minister acknowledged that they did indeed find some goat remains when they stormed the island but claimed that the goats had been butchered and eaten for lunch by the Moroccans. A tragedy for Luchili and her goats but ridiculously amusing nonetheless…
Seriously… you can’t make this stuff up!

Did you know?
– In 2010, the internet giant Google wrongly identified Parsley Island as belonging to Morocco. They apologized to Spain and quickly made changes to their Google Maps app.
– In 2016 the movie La Isla debuted in theaters across Spain. It is based loosely on the events of the Battle of Parsley Island. You can find it on Netflix or Hulu streaming services and yes, it is in the comedy section.