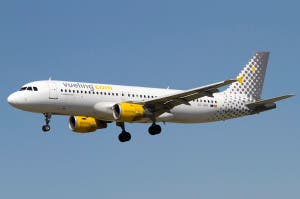 HUNDREDS of flights from Spain have been cancelled today and tomorrow by budget airline Vueling as pilots begin a 24-hour strike.

Passengers face severe delays and disruptive flight changes as the company has been forced to cancel some 200 flights.

Domestic flights within Spain will be affected as well as those to destinations across Europe, including to London Gatwick and Luton Airport.

The majority of flights affected will be domestic flights from Malaga, Alicante and Granada.

However the low-cost airline said around 81% of flights should depart on time and has announced it will notify all passengers of any delays or cancellations.

This is the second walk out staged by Vueling staff in under a week, which saw the company cancel a whopping 246 flights.

It comes after the Spanish Airline Pilots Union (SEPLA) called on Vueling to create more job prospects in Spain and to improve employment contracts.

The company – owned by British Airways’ parent company, International Airlines Group – has around 1,000 pilots based in Spain but this is reportedly set to change, as staff could be moved abroad.

Juan Manuel Redondo, head of the trade union section of SEPLA at Vueling, said: ‘Now that Vueling is tripling its profits, and that there have even been distributions of up to €100 million of dividends before results, the conditions for the pilots do not change.’

Travellers affected by cancellations have been advised to change their reservations for the next available flight.

You can see a full list of cancelled trips here: http://vuelingnews.com/vuelos-cancelados-3-mayo-canceled-flights-3rd-may/?lang=en

Maximise your income: Novasol has the experience and expertise to help holiday-let landlords in Spain and Europe stay ahead of the game