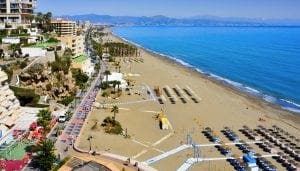 UNPUBLISHED documents have revealed there was a concentration camp on the Costa del Sol during the Franco era.

Although it was always known that one existed in Torremolinos it was never officially proved, until now.

Local historian, Carlos Blanco, has discovered the official documents, including a management report, an administrative document and an invoice.

According to the documents, the camp was set up by the Franco dictatorship between 1938 and 1939, occupying the land where the Aquapark now stands, reported Diario Sur.

A budget by the National Ministry of Defence revealed that the Sevilla tax office covered up the costs of the horrific camp, which included a daily expense of 1.65 pesetas per person.

Over the year, the camp reportedly held thousands of prisoners of war who were abused and forced to carry out labour work.

Diario Sur reported that some investigations suggest parts of Malaga Airport were built by the prisoners.

Some years ago, the former Mayor of Torremolinos, Pedro Fernandez Montes, denied that a concentration camp existed in the area, insisting it was a type of juvenile detention center and they are ‘not the same thing’. Yet the discovery of the documents refutes these claims.

One certificate signed by the camp’s chief captain on March 30 1939 stated that 1,924 prisoners of war were being held.

Not only Republicans were forced into the camps, but also homosexuals, foreigners, gypsies and dissident politicians were held captive.

Although historians do not know the extent of what happened on the brutal Costa del Sol camp, it is known that the walls of the cemetery were used to kill prisoners by firing squad.

It remains unclear exactly how many prisoners were kept there and for how many years the camp operated.