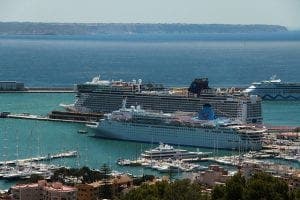 MALLORQUIN activists have stepped up their opposition to ‘out of control’ tourism by demanding that the authorities introduce a daily tax on cruise ship passengers.

The proposition follows the doubling of the existing tourism tax on May 1.

The group further demanded that there should be a two boat per day limit on cruise ships arriving in Palma and a Controlled Emission Zone (CZE) introduced around Mallorca.

The CZE would require shipping companies to use more expensive but less environmentally damaging fuel.

The protective zones already exist in other popular shipping areas, such as the Baltic Sea, North Sea and the English Channel.

The island has already seen one protest against the cruise industry this year after GOB-Mallorca, another environmental group, held an animated rally to mark the arrival of the world’s largest cruise ship.

Protesters chanted anti-tourism slogans and held banners as holidaymakers disembarked from the Symphony of the Seas vessel, which can carry 6,680 passengers.

Organisers expressed concern over environmental damage that was being inflicted by large cruise ships, highlighting that Symphony uses the same amount of energy in three days that Palma Airport does in one year.

The Balearic Islands has welcome 45 cruises in the first three months of this year, a remarkable 80% increase on the same quarter in 2017.