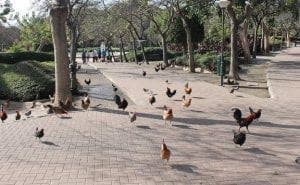 A POPULAR park has almost become a ‘no-go zone’ for tourists after being invaded by chickens.

A sharp rise in the numbers of hens and roosters has left visitors crying fowl at La Paloma park, in Benalmadena.

The town hall has confirmed it has received hundreds of complaints from visitors that the chicken population has got out of control.

There are now said to be over 400 birds roaming the park, with some visitors claiming they have completely ‘taken over’.

The actual figure could be much higher, as a lack of an official record makes it impossible to record accurately.

The town hall says the problem has proliferated due to chicken owners dumping their unwanted birds in the park.

Many visitors say the birds, which are susceptible to ticks, fleas and lice, are increasing the risk of infections and diseases, such as bird flu, in the town.

It comes after the budget for park maintenance was cut by €1 million last year.