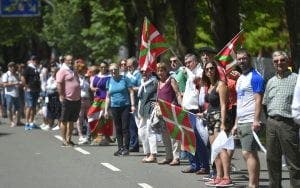 ALMOST 200,000 protestors formed a human chain to call for a referendum on the independence of the Basque Country from Spain.

Spaniards from the wealthy region formed a line that stretched over 200km  to demand a ballot on secession.

Protesters held hands or extended scarves between themselves to form the human chain, which connected the cities of San Sebastian, Bilbao and regional seat Vitoria.

The scarves bore the slogan ‘It’s in our hands’, written in Basque.

Organizers said at least 175,000 people participated in the event yesterday.

It comes a month after the region’s militant group ETA formally disbanded.