SPAIN has a new botched restoration on its hands.

It comes after the iconic botched Ecce Homo ‘restoration’ in 2012 went viral and sparked an international news storm – there was even an opera made based on the botched job.

The town of Borja actually saw tourism boom thanks to the well-meaning local lady’s efforts.

But now, a wooden sculpture of Saint George from the 1500s has received its own questionable restoration.

The sculpture takes pride of place in the Church of Saint Michael in Estella, Navarre.

The dragon-slaying warrior has been covered in a layer of paint that has eliminated all previously existing nuance, while his new mug looks straight out of an old TV cartoon. 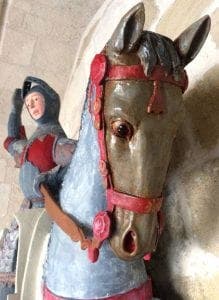 Karmacolor, the company in charge of the restoration work, uploaded a video to Facebook showing every step of the project.

It has now been taken down.

The Association of Conservators and Restorers of Spain (ACRE) said in a statement that the outcome ‘shows a frightening lack of training of the kind required for this sort of job.’

It has been revealed that church managers hired an arts-and-crafts workshop to carry out the restoration of a Gothic-era artwork.

Sources at the Pamplona archbishop’s office told the news agency EFE on Monday that the parish priest did not intend for the sculpture to get redone: “He just wanted to clean up a space that was dirty.”

Experts are working to analyse Saint George to see whether or not he can be brought back to his original look.

In the meantime, ACRE said it will file a legal complaint against the people in charge of ‘this unfortunate intervention’ that has resulted in ‘the destruction of part of Navarre’s cultural heritage.’

The mayor of Estella, Koldo Leoz said: “The restoration project should have been presented to the authorities first, and they should have waited to get the green light.”