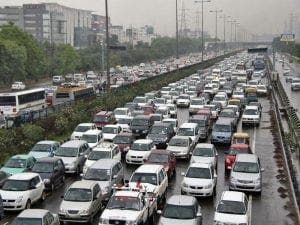 In the first study of its kind in Spain, researchers from the National Health School in Madrid have suggested traffic restrictions should be imposed in a bid to cut down air pollution.

Biologist and researcher, Cristina Linares, told El Pais: “There has been a trend toward diesel in Spanish vehicles, and diesel motors are the largest source of nitrogen dioxide.”

It comes as a recent study by Environment International revealed nitrogen dioxide is the cause of some 6,085 deaths every year.

According to the World Health Organisation the common chemical poses serious health risks and is released every day by engines and heating machines.

Shockingly, preventable deaths caused by pollution are much higher than those caused by car accidents.

Julio Díaz, head of the Epidemiology Department at the National Health School, said: “Three percent of Spain’s annual mortality is caused by this atmospheric pollution.

“This mortality rate is eight times greater than the mortality caused by car accidents each year.”