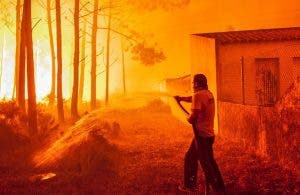 WILDFIRES wreaked more devastation  on the Iberian Peninsula last summer than at any time during its recent history, according to the World Wildlife Fund.

In fact, the number of fires that blazed a trail of destruction through the region in 2017 was a massive 200% increase on the average for the last 10 years.

The toll of tragedy totted up to 500,000 hectares of scorched earth, untold damage to wildlife and ‘some of the worst disasters ever remembered, leaving more than 100 people dead,’ says the report.

Galicia, Asturias and León, along with north and western Portugal, were worst affected with multiples fires across their regions.

Among the causes of the devastation, the WWF cites climate change, rural depopulation, a chaotic urban model and human carelessness.