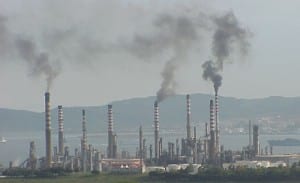 And according to the WHO’s latest shocking report, the ‘majority’ of Andalucians live in places where the pollution is higher than recommended, while 10% (850,000) are breathing air so toxic it crosses the red line into illegality.

A staggering 97% of the population and 88% of territories were exposed to unacceptable levels of pollution in one way or another during 2017, according to the report.

Prepared for Spain’s Ecologistas en Accion group, data was collected from analysis stations all over the country. In Andalucia, almost all the 111 stations where air quality was monitored surpassed acceptable contamination levels.

Worst offenders were the industrial zones of Carboneras (Almeria), Algeciras Bay (Cadiz), Puente Nuevo (Cordoba) and Huelva, along with the city centres of Cordoba, Granada, Malaga and Sevilla. The high pollution count was due to the presence of carbon factories in industrial zones and traffic fumes in cities.

It is much higher than the number of people killed on the roads in car accidents.
Researchers from the National Health School in Madrid have now called for traffic restrictions to cut down air pollution.

Biologist and researcher Cristina Linares said: “There has been a trend toward diesel in Spanish vehicles, and diesel motors are the largest source of nitrogen dioxide.”

It comes as a recent study by Environment International revealed nitrogen dioxide is the cause of some 6,085 deaths every year.

According to the World Health Organisation the common chemical poses serious health risks and is released every day by engines and heating machines.

George Mathias - 22 May, 2022 @ 17:00
CONTINUAL improvement is one of the secrets to giving great customer service. Let's talk about how Hamiltons has worked on its business to give...