Juzcar, near Ronda, was painted blue in 2011 after The Smurfs film used it as a marketing tool to promote the movie.

Since then, the village enjoyed a surge in tourism – around 50,000 visitors per year – bringing jobs and prosperity.

But since the heirs to the Smurf franchise took away Juzcar’s rights to associate with the characters, visitor numbers have fallen. 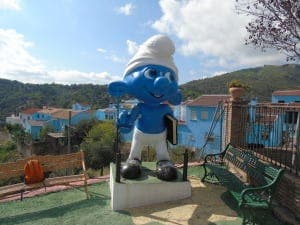 The mountain village of 200 residents was forced to rebrand as the ‘Blue Village’ last year, and introduced zip lines and hiking routes in an attempt to keep tourism numbers up.

However, rumours that it is to be painted white again are untrue, confirmed local hotel owner Ivan Sastre Pascual.

“Every day people call to ask if the town isn’t blue anymore,” he said, “There are many rumours that are not true.”

On the boost that The Smurfs association brought the town, he added: “It’s a gravy train that happens once in a lifetime, and since we have got on board, we have to do everything possible to keep us there.”