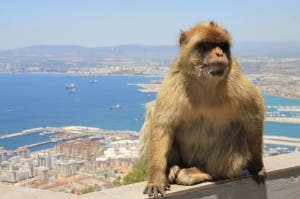 IT is possibly the last place you would want your handbag grabbed by a monkey.

And particularly when it contains your entire family’s passports, not to mention holiday spending money.

But this is what happened to one unfortunate British family when they took a trip to the newly-installed Skywalk in Gibraltar last week.

Having made their way up to the top of the Rock they came face to face with one of the enclave’s cheekiest monkeys, appropriately named Dracula.

As they made their way along the death-defying glass installation, the aggressive male macaque swooped over and swiped the unprepared mother’s handbag.

As quick as a flash he climbed down below the see-through glass walkway and proceeded to empty it out, throwing all five of the family’s passports and around 100 euros out of the bag.

“There was literally nothing they could do,” explained staff member Shaun Williams.

They could only watch as their documents got scattered on the nearly vertical slope and the money blew away.

“There was no way they could go down and get them and they had to go to the police station to report them missing. It took a shine off their day trip from Marbella,” he added.

“That Dracula is a really evil one and was only after food. As soon as he realised there wasn’t any he ran off.”

This week the Olive Press managed to track down Dracula, who looked entirely unperturbed by his actions. Two of the passports could still be easily seen.

“They were just lucky that the father had kept the hire car keys in his pocket or they wouldn’t have even got back to their hotel that night,” added Williams.

Last year, the Olive Press reported how a British tourist had filed a sexual assault claim against a Gibraltar monkey at the local police station, only to be told there was no law against it.

She was furious after police allegedly asked her if she expected them to arrange a line up to pick out the guilty ape.