A 20-YEAR-OLD Brit remains in a critical condition after balcony fall ‘while trying to take a poo over the edge’.

According to The Sun, the man lost his balance whilst sat with his bottom over the edge of his sixth floor balcony and plummeted 25 feet, landing on his head.

The incident happened at 3.30am this morning, and an ambulance took the man to hospital shortly after where he remains in a serious condition.

Two friends were seen breaking down in tears and had to be held back by a local police officer  as he was taken to hospital.

Guardia Civil officers were not prepared to comment on claims around the circumstances of the fall, simply saying:

“The matter is under investigation.”

The UK Foreign Office issued a travel warning about Spanish balconies earlier this year as the incident is one of many to occur over the last few months. 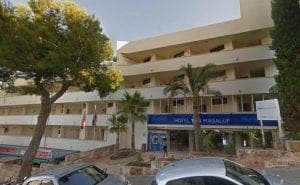 Andrew Rhys Philips was seriously injured after falling from a balcony at the TRH Magaluf Hotel in May, the same hotel as the incident earlier today.

Natalie Cormack, Thomas Channon and Tom Hughes have also all fallen to their deaths this year at a similar hotel nearby, and local councils have began to impose fines on people acting in a unsafe manner on balconies.