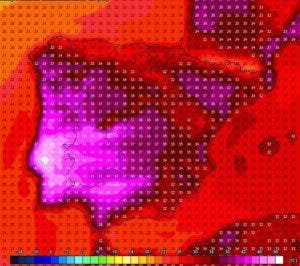 RED alerts have been issued across Spain as a killer heatwave continues to spread across the country.

Thanks to a hot air blast from the Sahara in Africa, the mercury is expected to reach 48C in parts of Andalucia today and a European record of 50C in Portugal.

It comes after a highway maintenance worker collapsed from heat stroke and died in Murcia yesterday.

The hottest regions in Europe will be around Sevilla and the Algarve in Portugal, with temperatures around 48C and 50C predicted.

Ex-BBC and Met Office forecaster John Hammond said: “Hell is (now) a place on Earth. Iberia is heating up to a potential 50C.”

Some 40 of Spain’s 50 provinces are on red alert, which means there is a serious threat to life.

Met Office forecaster Richard Miles told the Daily Star: “48C is the most realistic maximum temperature in inland Spain and Portugal, but there’s a chance it could be hotter. People on holiday should be careful in the heat.”