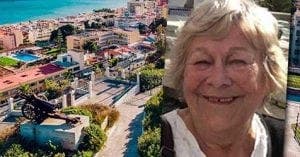 A BRITISH expat has been found injured after she went missing for more than a week.

It comes after Josephine O’Gara, 76,  walked out of Hospital Clinico Malaga at 1.45am on Monday July 30.

Son, Matt O’Gara, posted on Facebook this morning that she has been found ‘injured but alive’ and has been taken back to hospital.

According to her family she was in hospital for treatment of severe arthritis pain and has recently experienced periods of confusion.

Matt thanked expats for re-posting his plea to find his Mum on Facebook which received almost 700 shares.

O’Gara was reported missing on Saturday by friends in Torremolinos after their inquiries at local hospitals didn’t yield any information as to her whereabouts.