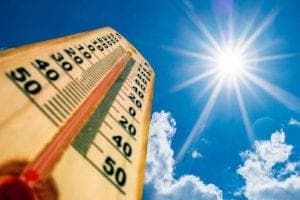 THE heatwave sweeping Spain has now claimed seven victims after a 40-year-old man died on the Camino de Santiago pilgrimage.

Also known as the Way of Saint James, the pilgrimage claims lives every year as people attempt to treck more than 500 miles in just over a month in sweltering heat.

Deaths were also recorded in Extremadura and Catalunya as a direct result of heat stroke, according to local officials.

Last week a 48-year-old construction worker and 78-year-old pensioner both died in Murcia due to the weather.

Temperatures are set to be high for the remainder of the week, with forecasters predicting more than 40C in some areas.

Despite the continual hot weather, firefighters now have the wildfire under control that had spread from Portugal’s Algarve into the southwestern region of Huelva.

Weather warnings were issued in 39 provinces across the country last week and the heat has been relentless since.