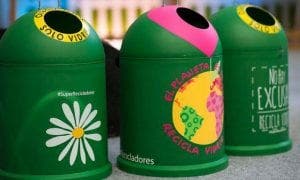 According to the City Council, almost 50% of waste from the hospitality sector consists of glass bottles and containers that will only be used once.

So, with the summer surge in tourists swelling the city’s population, the council has  teamed up with non-profit Ecovidrio to launch a recycling campaign along the Costa del Sol.

The campaign is targeting 109 establishments along the Malaga coast by providing them with new recycling containers to make it easier to collect.

As an extra incentive, there’s a prize of a master class with three-star Michelin chef Quique Dacosta for those businesses which recycle the most.

Ecovidrio will also recognise municipalities’ best recycling efforts and has provided 26 decorative containers in hopes of encouraging more citizens and tourists to use them.

Malaga hopes to top the amount of glass it recycled last year, which weighed in at an astonishing 5,237,290 kilos.