THIS is the moment hundreds of people were left injured after a wooden walkway collapsed at a festival in Galicia last night.

Police confirmed five of those injured are in a serious condition, including two children, although there are no known fatalities.

Revellers dropped 30 metres into the sea below, with some affected suffering from brain injuries.

The O Marisquiño festival, held in Vigo, was attended mostly by teenagers and young adults who were there to watch Mallorcan rap artist Rels B.

Divers were sent in to check that nobody was stuck under the structure as handbags and mobile phones were seen scattered across the remaining stage.

She said: “It was a matter of five seconds and the floor fell like it was an elevator.

“I had people underneath [me], screaming that they could not get out. I was overwhelmed. I thought I was not going to get out. I was trying and falling down again.” 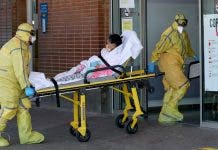