A BREED of bugs is on the rise in Europe and the US and it’s transmitting a ‘silent killer’ disease.

Known as ‘chinches del beso’ – or kiss bug – this relative of the bed bug bites humans on the face and in the areas around the mouth.

It then defecates next to its bite, spreading a parasitic disease which was until recently limited to South America.

Chagas disease can cause serious cardiac and intestinal complications – and most people infected don’t know they have it as there can be little to no symptoms.

Labelled a ‘silent killer’, one in three with Chagas develop heart problems, may suffer heart failure and even sudden death if they are not diagnosed in time.

According to a new statement by the American Heart Association (AHA) and the Inter-American Cardiology Society, the disease is spreading through the US, Canada, Australia, Japan and Europe. 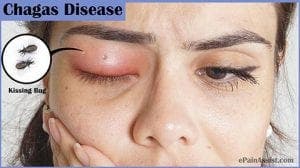 The kissing bugs have appeared in the southern states of the US and in Spain and Italy.

According to the study, there are around 42,000 individuals with Chagas alone in Spain, 300,000 in the US and up to six million people worldwide.

Chagas disease is a parasitic infestation, and requires a carrier of the parasite, Trypanosoma cruzi.

That vector is the ‘kiss bugs’, which usually bite humans, dogs and other mammals at night, on face and near the eyes and mouth.

Currently more than 100 species of different triatomines are known, and 12 of them are transporters of the parasite that causes Chagas.

When they bite, the insects defecate right next to the wound they have caused.

The parasite is found in its feces, and when the wound is rubbed, the parasite penetrates and causes the infection.

The majority of the infected individuals either do not show symptoms or at most only suffer a swelling of the eyelids.

In more serious cases, it can cause diarrhea or vomiting.

The problem is not so much the initial phase of the infection, but if left untreated, the disease becomes chronic, and in the long term up to 30% of those infected develop serious complications.

The parasite can also be transmitted through blood transfusions, donation of organs and even from pregnant women to their children.

CORRECTION: A previous version of this article referred to kissing bugs as bed bugs, they are relatives of bed bugs