RYANAIR has announced a record 36 new routes between Spain and Europe.

The new connections will be in place for next summer with the majority being between Spain and the UK.

There are 11 new routes to and from Great Britain, including Malaga to London Southend, London Exeter and Luton and Sevilla to Edinburgh and Bristol. 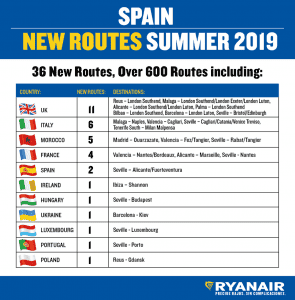 In total, it will offer more than 600 routes between Spain and Europe, transporting 48.3 million passengers annually and increasing its traffic by 3%.
Ryanair customers in Spain can already make their advanced reservations until October 2019.

Kenny Jacobs, from Ryanair, said today in Madrid: “We are delighted to announce our summer calendar for the next season of 2019 in Spain, which includes 36 new routes and with which we will exceed 600 in total.

“From today, our customers in Spain will be able to book their flights for the next summer of 2019, with the cheapest fares.

“To celebrate the announcement of our 2019 summer calendar for Spain, we have launched an offer of seats from just €14.99, to travel between October and December.

“These tickets are now available for your reservation until Thursday, October 4, through www.ryanair.com. “