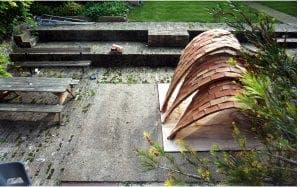 THE Tile of Spain Awards is open for entries – and it’s cooler than it sounds.

Architects, interior designers and students are invited to submit projects for a chance to share a €39,000 prize fund.

Now in their 17th year, the awards celebrate projects from across the globe that make innovative use of Spanish ceramics.

Organised by ASCER, the Spanish Ceramic Tile Manufacturer’s Association, the cash prize will be split between three categories: architecture, interiors, and student degree projects.
Jorge Vidal’s Mont-Ras winery was the winner of the 2017 architecture award.

The winners of the two main prizes, Architecture and Interior design, will receive €17,000 each, while the student who earns first place in the Final Degree Project category will receive €5,000.

Heading up the judging panel this year is Argentinian architect Jorge Silvetti, founder of Machado and Silvetti Associates. He will be joined by architects Elías Torres and Ricardo Carvalho.

The Mont-Ras winery in northeast Spain made use of rustic, fired clay tiles
Barcelona-based architect Jordi Garcés will also be part of the team, whose studio Garcés-de Seta-Bonet was named winner of the Interior Design category in 2017.

The studio employed grey-tone ceramics to update three stations on Barcelona’s L9 train line, which the judges praised for “overcoming all the challenges posed for floor coverings in public spaces”.

Special mention was also given in this category to Barcelona practice Arquitectura-G, who boldly contrasted brick-red tiles against the white-painted walls of a family home.

Student Rafael López-Toribio Moreno landed first place in the Final Degree Project category, commended for his proposal to use tiles in the restoration of Granada’s ancient Zirí wall.

Entry to this year’s awards is free and submissions are being accepted until 24 October 2018. Projects entered must have been completed between January 2016 and October 2018.

Off-the-beaten-track: Ten destinations in Spain that should be on your travel bucket list this summer