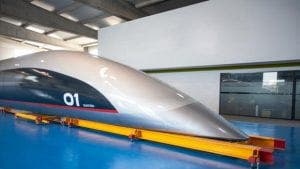 AN Andalucian firm has built the first passenger capsule for the highly-anticipated Hyperloop rapid transport system.

Airtificial, based in Cadiz, reached the global milestone in a project with California-based Hyperloop Transportation Technologies, and believes it will create wealth across Spain.

The first full-sized 40-seater pod, designed to propel passengers through large tubes at a speed of 1,200km/hr, was unveiled at the company’s plant in El Puerto de Santa Maria.

Said Airtificial cofounder Rafael Contreras: “They told you about a historic train, but what I want to emphasise is that we are making history.

“We are from the south of Spain. I call Cádiz Kilometer Zero and, from here, we have become global.”

Javier Moreno, responsible for design, is convinced the rapid transport project will generate great wealth in the region.

“When we were shown the drawing, we raised our hands to our heads. We received a wonderful sketch that we had to make reality and we had to think about everything – rivets, raw materials, problems with the assembly … more than an Airbus,” he said, “ We have created wealth with this project.”

The next step is to integrate the capsule into an entire Hyperloop technological system.

The company is already developing a second shuttle for a network project in Abu Dhabi.

Hyperloop stems from an idea by Elon Musk, the former president of Tesla and founder of PayPal, together with SpaceX and Tesla Motors.

There are several other consortiums in the race to make the idea a reality.

One is Californian company Hyperloop Transportation Technologies, which employs more than 800 professionals from 38 different countries within a project whose investment exceeds €100 million.

Another is Virgin Hyperloop One, which recently signed an agreement with Adif to build an innovation centre in Bobadilla, Antequera, to investigate the possibilities of the Hyperloop.