A MISSING dog which escaped ‘terrified’ during the storms has miraculously been found and reunited with its owner on the Costa del Sol.

Polly the Podenco, who had been missing since Thursday morning, after escaping from the family home in La Cala de Mijas, has been found alive and well following an incredible community response to an Olive Press appeal.

The ‘timid’ five-year-old rescue dog had torn a hole through the garden fence and bolted off during the storms ‘petrified’ and was nowhere to be found.

Fears were growing for the Podenco who has a severe kidney disease and can only survive on special diet.

Polly has now been reunited safe and well with owner, Julie Frank and her family, after a local spotted the pup roaming in the cemetery in Fuengirola.

“I didn’t think we’d get her back,” said Julie from Lancashire, “and we wouldn’t if it wasn’t for all the help. Everyone has been amazing and so lovely.

“Thank you so much to the Olive Press, the couple that found Polly and everyone on social media.”

Recognising Polly from the online appeal, Mariel and Fran Mata, based in El Chapparel, tried to approach the pup but she was too frightened and called Julie.

“She ran up to me and squealed when I called her. We’re so happy to have her home,” said Julie.

Polly is said to be ‘shattered’ but enjoying being back with her home comforts and cuddly toys after her ordeal.

“I’d also like to say a huge thanks to Melissa from Mellisa’s Rescue Paws in La Cala too.

“She came out looking a few times in the storm despite being pregnant. Everyone has been fantastic. Thank you,” added Julie. 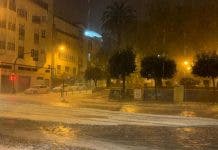 Laurence Dollimore (News Editor) - 28 Jan, 2020 @ 12:19
THREE leading Spanish agricultural unions have joined forces in calling for protests over the sector's 'lack of profits'.  According to the Asaja, COAG and UPA...