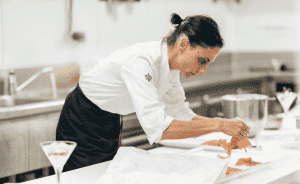 THE dishes come out as seductive as the sunset over the nearby Alcornocales mountains.

Beautifully presented, they combine both symmetry and sensitivity in equal measures, and cheer up an otherwise midweek lunchtime. 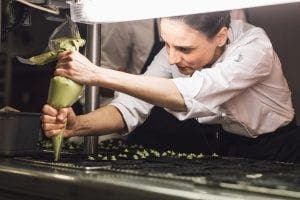 So it is no surprise to discover that these are the creations of Cristina Gutierrez, one of Andalucia’s incredibly rare female head chefs.

A local lass from La Linea, she leads the kitchen of five chefs (with one other woman, Maria) at the amazing L’Olive restaurant, deep in the heart of one of the region’s most privileged enclaves.

This is La Reserva, in Sotogrande, a bastion of understated elegance, alongside an overriding sense of authenticity and wealth.

Yet, at the seven-year-old restaurant you can happily have a more than filling lunch, with a glass of wine, for 25 euros per head.

Much of this is thanks to the clever use of ingredients by Cristina, who trained in nearby

San Roque, and whose charges in the kitchen are almost entirely from the local area.

“We get plenty of our avocados from Miguel’s farm in Jimena and more veg from Guillermo and Manuel’s families in Secadero and San Martin de Tesorillo,” she tells me.

Meanwhile, she has planted a few herbs outside the backdoor, including a fantastic finger lime tree from Australia, producing amazing citric fruit, which would normally set her back from 140 euros a kilo at markets in Spain. 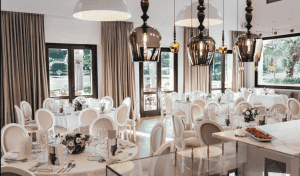 It is this attention to detail that marks out the difference in quality at La Reserva that you don’t generally find in the south of Spain.

“That’s because I spent quite a few years in the north of Spain, around Pamplona,” explains the mother-of-one, whose husband is a doctor in La Linea.

“The food culture is different up there, with one main exception – the quality and importance of good local ingredients. And I am really big on knowing exactly who my producers are.”

She is also incredibly fussy about being seasonal and changes the menu every two or three months to reflect that. 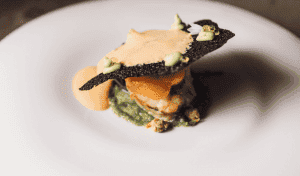 This month, for example, there are special dishes involving bluefin tuna, plus an amazing autumnal grilled octopus, served on a bed of new potatoes and in an exciting, creamy Peruvian ‘anticuchera sauce’.

And, of course, with Halloween beckoning, there are a range of appropriately witchy dishes, such as the stuffed mini pumpkin, with sweet potato, mushrooms and shavings of parmesan.

There is certainly nothing vaguely ordinary about the culinary offering at La Reserva. 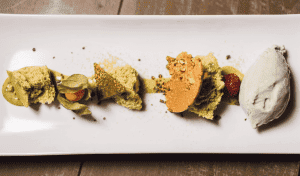 Aside from the amazing new Beach restaurant added this summer, which the Olive Press reviewed in August, there are a series of special events involving global culinary stars throughout the year.

These include Jerome Bocuse, from France’s most famous three Michelin-star restaurant Paul Bocuse, in Collonges au Mont d’Or, who is making a series of trips over for show-cooking events throughout the year.

“There is actually a tie in with the Bocuse group now,” explains Sotogrande S.A. CEO Marc Topiol. “We have them involved in an advisory capacity and there is a connection with their chefs.

“We will be doing a series of regular events with them and other international chefs in February, March, April and May next year.” 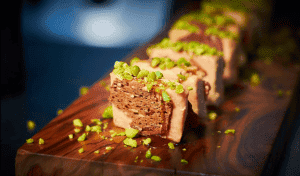 The first link up came to fruition this month, when a team from the Bocuse stable, including Jerome, were on hand for a weekend, involving a six-dish Friday night dinner and a culinary golf event on the Saturday.

The splendid six course meal was a classic Gallic tour de force, including a casserole of Breton lobster, a smoked salmon confit ‘a la Scandinave’ and Bresse chicken cooked in a bladder, with morel mushrooms.

“The culinary experience is going to be a big growth area next year and we are trying to integrate the two restaurants,” explains Topiol, himself a keen gourmet, which is little surprise given his French roots.

“We are also introducing a new farm area this autumn, where we are going to start growing our own produce. This will also involve the creation of allotments for residents to grown their own produce.

“It’s a great way for children to learn about food and the environment,” he adds.

In terms of Sotogrande’s general culinary offering, the port in particular goes from strength to strength.

The area has never been fuller at nights, particularly at weekends, and this is very much to do with the half dozen restaurants that have opened in the Blue Marina zone.

One of the best is Don Diego, which has a good mix of Spanish dishes, fused with Asian and south American cuisine. 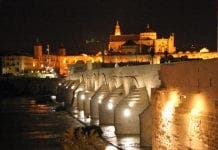 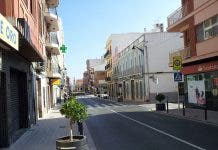