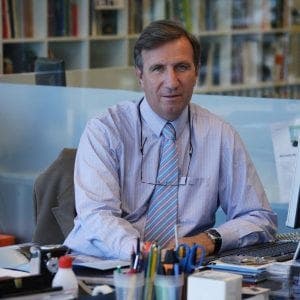 With his business partner Javier Iribarren, the Sotogrande-based designer’s Fenwick Iribarren is one of the world’s most recognised architectural firms, with a portfolio that includes Barcelona’s award-winning Cornellà-El Prat football stadium and new stadia for the 2022 FIFA World Cup in Qatar.

Now, with Madrid’s Espacio Caleido – or ‘big sculpture’, as Fenwick brands it, set to be the fifth tower in Madrid’s Business Area – the duo are embarking on one of their most ambitious projects yet.

The 180-metre tower will change the capital’s skyline forever due to its unique upside-down T shape which will be the first of its kind in the world.

It will hold three levels of parking, the Business Institute, a university campus and jaw-dropping views over the city and its mountain backdrop.

“Everything begins with a pencil and a blank piece of paper;” explains Fenwick, who grew up in Torremolinos.

The rest is ‘a lot of hard work and a bit more, a lot more than others.’

This was especially true when the financial crash of 2008 threatened to destroy everything the Brit had worked for.

But the tough designer revealed he sought inspiration from the Chinese definition of ‘crisis’, represented by two symbols – one meaning danger and the other opportunity.

As much of the western world was crippled by the crash, Fenwick sought emerging markets in the Middle East.

It was in Qatar where the Brit was able to forge good relations with the crown prince, negotiating the rights to construct the now iconic Cameldrome stadium.

Building on that success, Fenwick Iribarren is now constructing three of the eight stadiums to be used for the 2022 World Cup in Qatar.

Elena Gocmen Rueda - 24 Jan, 2022 @ 12:45
POLICE clashed with dozens of young people who gathered in the streets to celebrate the end of a restrictive curfew in Spain’s northeastern region...