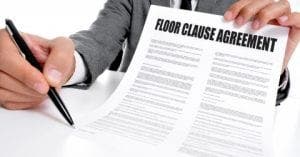 SPAIN’S judicial system is failing to cope with the hundreds of thousands of ‘floor clause’ cases being brought before the courts.

Despite 54 specialised courts being set up across Spain – with at least one in every province – the sheer onslaught of cases is proving too overwhelming.

Many victims claim they have waited up to a year just for their cases to be admitted.
The situation isn’t helped by banks, which appear to be challenging every single ruling despite losing 97% of cases.

Lenders are creating a second bottleneck of appeal cases which is ‘unjustifiably hobbling’ the system with an ‘artificial litigiousness that could easily be avoided, and which is consuming huge amounts of public resources,’ according to the head of Murcia’s High Court Miguel Pasqual de Riquelme.

As thousands of families continue to seek justice, it’s important to remember how they found themselves locked into dodgy mortgage contracts.

Floor clauses, which were often secretly written in, imposed a minimum interest rate on floating-rate mortgages by setting a limit on how far they could fall in tandem with the benchmark rate.

In practice, this meant that Spanish mortgage buyers did not profit fully from record-low interest rates which Spain enjoyed for several years.

The clauses were ruled illegal by the Spanish high court in 2013.

It has taken some families up to 10 years to get their money back, or even get their case admitted to court.

If you want to avoid such situations, the answer is simple – always hire a mortgage broker.

The Finance Bureau has established links with the biggest lenders and acts as a go-between for the client and the bank but – crucially – the broker is not connected to the bank and works to find the buyer the best deal available.

We also highlight any hidden fees or compulsory add-ons tucked away in the small print – it is important to know exactly what is attached to your mortgage.

When it comes to picking a mortgage, you pretty much have one shot to get it right.
Hiring a mortgage broker is a small price to pay for peace of mind and a legal and fair contract.