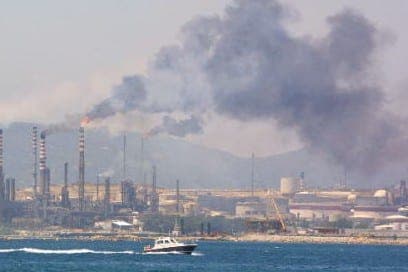 ENVIRONMENTAL groups are taking legal action against the Junta for ‘failing to tackle toxic air’ in the Campo de Gibraltar.

Ecologistas en Accion has filed a complaint with the Health Ministry, claiming nothing has been done to protect citizens from a rise in air pollutants caused by the expansion of ‘toxic’ industries in the Bay of Algeciras.

According to the green group, more than 10,000 tonnes of dangerous pollutants were released into the atmosphere last year.

This includes potentially lethal cancer-causing chemical benzene, as well as other fine particles.

The writ comes as Cadiz province was officially declared to have the worst air quality in Spain.

And alarmingly, La Linea, which borders Gibraltar, ranks as the 30th most polluted place in the world in terms of air quality.

The shocking stats were revealed in a damning World Health Organisation report which lists the world’s ‘most contaminated’ towns and cities.

Adding salt to the wound, Cadiz also came bottom in the list of Spain’s ‘most sustainable cities’, produced by the Observatory of Sustainability (OMS).

Ecologistas en Accion insists the Junta is failing to fulfill its duty to ‘adopt whatever measures are necessary to achieve a high level of protection for people and the environment’.

It adds that the Sevilla-based body is failing to ‘adopt plans to improve air quality and adopt control and inspection measures.’

“It needs to develop a quality control system that ensures consistent and transparent measurements or estimates of pollutants by law,” said a spokesman.

The group says oil refineries and other industries are posing a real threat to public health.

A recent study by the Carlos III Health Institute, funded by the Ministry of Health, revealed Cadiz, Sevilla and Huelva to have the highest number of cancer deaths in Spain.

San Roque, meanwhile, has one of the highest percentages of lung and bladder cancers in the country, directly linked to air pollution and in particular benzene.

The surrounding towns, including Puerto Real and San Fernando, also have far higher than average cancer rates than national averages.