TWO Spanish architects have been awarded a ‘lifetime honour’ by the presitigous Royal Institute of British Architects (RIBA).

Ignacio Vicens y Hualde and Emilio Tunon are among seven laureates set to receive 2019 International Fellowships at a ceremony next February.

The lifetime honour recognises the contributions of architects internationally and allows recipients to use the initials FRIBA after their names.

Tunon, of Tunon and Ruckstuhl Architects in Madrid, has taught in universities around the world and was previously awarded the Gold Medal of Merit in Fine Arts from the Spanish Ministry of Culture.

Hualde, head of Madrid-based Vicens + Ramos Architects, has also taught across the Americas and Europe. His notable works including the School of Communications at the University of Navarra and the Churches of Rivas-Vaciamadrid.

Together they are changing the skyline of Spain and Andalucia with their  iconic structures.

The OP delved into their portfolio of projects, completed or underway, to bring you the highlights. 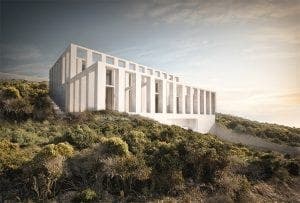 On a steep slope overlooking the Alemanes beach, this majestic 400 m² house will be carved into the land through a set of horizontal platforms, protected from the wind by thick concrete pillars. The top floor boasts stunning views over the ocean and houses a kitchen and master bedroom. The lower platform houses the pool surrounded by thick pillars, with parking on the floor below. 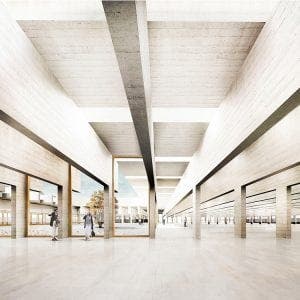 This proposed design is set to rise up on the banks of the river Duero, replicating the neat rows of the surrounding vineyards so precisely it’s almost invisible. Incredibly spacious inside, the Wine Dome is a basic structure of 86m2 with a square courtyard in the centre inspired by medieval monasteries which, according to Tunon, ‘treasured the wisdom of wine production’. 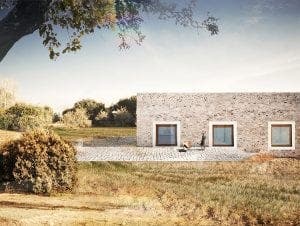 This picturesque home is to be built using quartzite from Caceres. Inside there are nine cubic rooms each measuring 4.20m2 which connect to the outside through large square oak  windows. The stunning home will come complete with a pool for the scorching Andalucian summers. 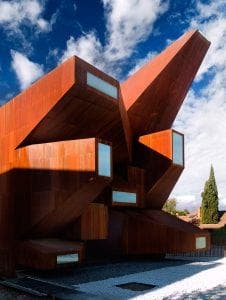 The Madrid-based studio was commissioned to create this Cubist-style place of worship for the quickly ballooning population of Rivas-Vaciamadrid, a new residential development 10 miles from the capital.

The church has a linear design to make the most of the plot and provide maximum capacity. The building also contains management offices, classrooms and accommodation for two priests. 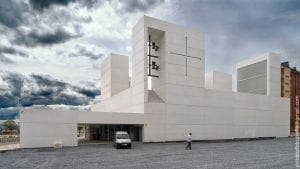 Another divine inspiration has been this imposing modern church in Ponferrada.

According to Ramos, the church’s main space is designed as a meeting place ‘for the joyous celebration of the Sacrifice.’ Its layout emphasises community and is littered with symbolic references while the design ensures that the altar, Holy See and pulpit  are visible to the entire congregation. 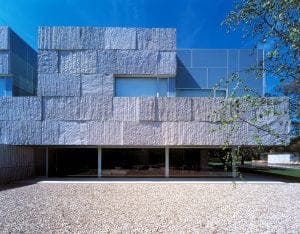 The construction of this unusual single-family home was carried out on lot #26 of Las Encinas Neighborhood, in Pozuelo, Madrid.

The Royal Institute of British Architects (RIBA) unveiled the seven laureates of the 2019 International Fellowships, a “lifetime honor allows recipients to use the initials Int FRIBA after their name,” recognizes the contributions that architects across the world outside of the UK have made in the field of architecture. Previously awarded to architects such as Jeanne Gang and Phillip Cox, the annual Fellowship emphasizes not only the impact of architects’ work in their respective homelands but also their global influence.

A juror’s committee, consisting of Ben Derbyshire, RIBA President; Lady Patty Hopkins, a 1994 RIBA Gold Medalist; Bob Shiel, a professor at the Bartlett School of Architecture; Wasfi Kani, a 2018 Honorary Fellow; and Pat Woodward RIBA, of Matthew Lloyd Architects, awarded the 2019 Fellows. The fellowships will be presented in London in February 2019.

Emilio Tuñón of Tuñón & Ruckstuhl Architects GmbH, a firm based in Spain, is an architect and professor at the Architecture School of the Universidad Politécnica de Madrid and has taught in many architecture schools around the world. He was also awarded the Gold Medal of Merit in Fina Arts from the Spanish Ministry of Culture.

A principal architect at Vicens + Ramos Architects, Ignacio Vicens y Hualde is also a professor of design at ETSAM and a visiting professor and lecturer at many architecture schools in Europe and the Americas. Some of his notable works include the School of Communications at the University of Navarra and the Churches of Rivas-Vaciamadrid. Additionally, he orchestrated the architectural scene in Madrid for Pope John Paul II’s visit in 1982, as well as for Benedict XVI over thirty years later.