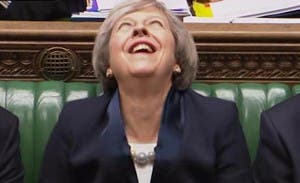 AS the turbulent political arena in the UK goes into overdrive, the Hokey Cokey comes to mind.

And hey presto, the volatility in the markets follows.

Daily fluctuations between the pound and euro have become addictive viewing (better than Netflix for a currency broker) for many people regularly moving money back and forwards between Britain and Spain.

And successful traders and Singapore speculators will have now ordered the fattest, plumpest, organic turkey for Christmas, after the huge profits they have probably made over the last few months.

For regular folk, however, volatility just translates to worry, anxiety and more often than not disappointment.

The pound is like Prime Minister Theresa May, caught between the devil and deep blue sea with no place to go or hide… it doesn’t know if it is coming or going at the moment. One minute hitting €1.15 and then next slipping to €1.13 the next day.

I also didn’t see an olive branch of ‘true belief’ in the draft Brexit document from her cabinet either.

I don’t know if, by the time this issue goes to print she will still be in a job. But she claims to be a survivor and vowed to dig in her heels. Cue song by Gloria Gaynor.

Help is at hand

Whenever geopolitical turmoil rules the markets, a responsible fx trader should be recommending ‘a forward contract’.

This fixes the exchange rate for a deliverable date in the future.

This ‘peace of mind’ financial tool enables us mere mortals to budget, and know what our costs will be in the months ahead.

Last week I recommended this fix deal to some British sellers who were repatriating their Euros back to Pounds, as well as some British off-plan buyers to ensure they could cover their regular stage payments well into the new year.

Ultimately I am protecting these clients from any downside and giving them less reason to worry.

Sure, it might not end up being the best rate they could have achieved …. as an exchange rate might improve when you have a fixed contract.

However, they won’t need to be glued to the money markets morning, noon and night for months, stressing over something they are not in control of.

There are no costs to buying ‘a forward contract’  but there can be a cost to not securing the exchange.

Most seasoned traders and international commercial directors employ ‘hedging strategies ‘ to avoid risking their hard earned profits, the same should apply to your personal wealth.

God bless Theresa May! And the pound.