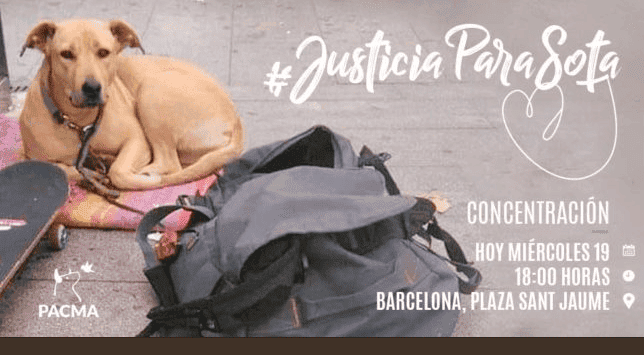 A PROTEST is underway this afternoon after a dog was shot and killed by Spanish police yesterday.

Sota was shot by cops in Barcelona while its owner was being arrested after allegedly failing to identify himself.

Police claim the dog had bitten the policeman’s arm and that the law enforcer feared for his life, leading him to shoot the dog.

While details are lacking, the owner of the dog has been arrested for assaulting the officer who shot his dog.

Police say the man is known to be violent and that when he was asked to identify himself he refused, leading to the skirmish.

Animal rights group PACMA has organised a rally this afternoon while the CUP has has called for an investigation into what happened.

Footage of the arrest (below) has been tweeted by PACMA.

It shows the suspect being held down by cops before panning to the left to show the dog lying still in a pool of blood.