AN ultra-Catholic organisation has revealed a campaign bus featuring a picture of Hitler in lipstick as part of a protest against gender violence laws.

HazteOir, the organisation staging the protest, are comparing campaigners for gender equality to Hitler, calling them ‘feminazis.’

The slogan on their bus reads: “#StopFeminazis, it is not Gender Violence, it is Domestic Violence”.

They are calling on Spain’s right-wing political parties to support a repeal genders laws, which they believe discriminate against men.

Luis Losada, a spokesman of HazteOir.org, says that the laws ‘have broken the right of equality of all people.’

The buses will appear across Spain in the run up to International Women’s day on March 8.

HazteOir is an ultra-Catholic organisation that has faced similar controversy before.

A previous campaign promoting transphobia was shut down on grounds of hate crime. 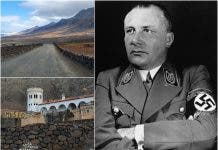 Cristina Hodgson - 29 Sep, 2020 @ 12:08
This structure has been declared an Asset of Cultural Interest (BIC), which means that it must be protected and preserved