THE Guardia Civil has arrested six people in Andalucia after they seized over 15,400 packs of contraband cigarettes that were sold in sweet shops.

Two brothers and two women, all members of a criminal gang, were among the arrests made in Jerez and Sevilla.

The tobacco, worth €67,000, was smuggled through Gibraltar, but was intercepted by authorities as part of ‘Operation Nicotine’.

Well-known brands, including American Legend, Marlboro and Chesterfield, were among the tobacco seized.

Officers made searches of two homes in Sevilla where the tobacco was stored, and two sweet shops where packs were sold illegally.

It is thought that the smuggling gang made orders of between 3,500 and 5,000 packs of cigarettes a week.

An initial haul by officers at a home in Los Barrios found 4,000 packs worth €16,200, which did not have the legal seals.

At two sweet shops in Sevilla officers seized a further 11,412 packs of cigarettes from Gibraltar, worth a total of €50,635.

One of the brothers was the ‘runner’ in the operation, meaning he would load up a car with tobacco and smuggle it into Spain. 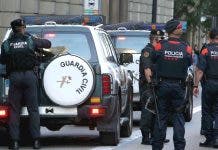