“IN the softening light of the afternoon I drove high up and found a spot where I could see the whole valley, green and lovely and apparently inaccessible.”

That is the description of life in one quiet corner of Granada’s Alpujarras area by one of the founding members of Genesis, Chris Stewart.

Writing in his seminal book Driving Over Lemons, published in 1999, the ex-drummer extols the rolling beauty of the fertile hills that sit below the snow-capped Sierra Nevada.

After buying his El Valero farm near Orgiva in 1988 with wife Ana, Stewart – like many other expats of the era – upped sticks and left the UK in search of a simpler life.

But that paradise, home to thousands of expats and locals alike, is now under threat.

The Junta de Andalucia has given partially state-owned company Red Electrica the green light to install a network of 352 giant electricity pylons across the Alpujarras and neighbouring Lecrin Valley.

Stretching over more than 100km of rural landscape, the blueprints include towers up to 80m high, which has enraged local communities.

The long, ugly line of metal has no human logic, arriving as often on the peaks of hills as in the gardens of locals.

Thousands of people are affected and the proposed route, which begins in Conchar in the west and ends at Benahadux in the east, was approved back in 2015.

But such is usually the way in Spain, opponents of the plans, including many who are set to have pylons or access roads encroaching their land, claim they were not told until a month ago.

More than 200 protected species could be affected by the power lines, of which over half are birds. They include the iconic Bonelli’s eagle which is under threat of extinction.

The large bird of prey is undergoing a serious decline in Spain mostly due to electrocution, illegal shooting and habitat destruction.

An allegation submitted to the Junta de Andalucia by green group Ecologistas en Accion claims building towers will threaten breeding grounds and increase the risk of eagles colliding with the tension cables.

Juan Manuel Pleguezuelos Zoology Professor at the University of Granada said: “Spain is home to over 75% of Europe’s Bonelli eagle population and so holds the greatest responsibility for its conservation.”

The deadline for people to register two different types of complaints against the plans was fortunately extended to March 7, such was the outpouring of rage.

One form alleges that the pylons would be damaging for local business, including tourism, while the other claims the unique flora and fauna of the area would be put at risk.

Michele Howard is one local British expat who has campaigned against the plans and has been gathering some of the 4,000 alegaciones (claim) forms sent to Granada City Hall and other local councils by residents.

The mum-of-two told the Olive Press that she and other campaigners have been collecting a cardboard box full of forms every day, since they found about the infrastructure project last month.

Robert and Michelle fell in love with the area 18 years ago and see it’s eco-friendly culture as a microcosm of what the world could be. But the Blow Monkeys frontman and his wife are not the only creatives to call the valley home. Record producer Martin Glover (Youth from 80s band Killing Joke), comedian Alexei Sayle, and actor Peter Capaldi have all also set up base in the area. The sublime landscape also inspired the literary giants of the 1930 like the Bloomsbury group’s Gerald Brenan and Virginia Woolf.

“I think the electricity company thought it would be a big walkover,” she told us from her idyllic terrace, which looking down the lush Lecrin Valley, where numerous celebrities, including Alexei Sayle, Peter Capaldi, of Doctor Who, and Blow Monkeys singer Dr Robert, have homes.

“These areas are very well-known internationally and there has been a huge backlash.

“It’s a paradise this place, it’s just ridiculous what they are doing, to put pylons through here will devastate the area socially and economically.”

The platform claims tourism is one of the ‘few remaining industries’ left in the area and Michele herself believes the pylons will risk leaving the valleys ‘impoverished’.

“It’s a ‘David and Goliath’ situation, the multinationals are moving in and everyone is saying ‘no’”

Of Andalucia’s 30.5 million tourists in 2018, 15.3% visited Granada, including the area where the pylons are to be built.

Along with hikers and cyclists, one of the most common types of visitors to the Alpujarras and the Lecrin Valley is the eco-tourist.

And many of those who are after a ‘greener’ holiday, away from the hustle and bustle of the Costa del Sol, end up at British expat Rita Islip’s hillside cortijo just outside Orgiva, the spiritual heart of the Alpujarras.

“I don’t have fences or a pool but people want that back-to-nature experience,” she tells us as we sample her cold-pressed olive oil, made at her home, which she rents out to weary backpackers chasing down what remains of the area’s Moorish history.

“I am very successful in that and I am quite unique, I’m booked up from June to August.

“It was a massive shock when I found out about the pylons after 36 years of living like this, it’s going to be very harmful for tourism.

“People come here from all over the world, but they won’t want to come here anymore if its ugly and spoiled.”

And Rita is more affected than most, as she points to where the pylons will fly invasively, directly over her house.

Her anger is shared by neighbour Ian who popped by with architectural plans to show us how both their houses, and their other neighbour Dan’s, are not even recognised by Red Electrica.

Pointing to the three blue marks he has added to symbolise their homes, you get a sense of the scale of the fight that residents of ‘Driving Over Lemons’ country are up against.

The situation is best described by Dr Robert, of the Blow Monkeys, who shares a house in the hills with his wife Michele.

“It’s a ‘David and Goliath’ situation,” he told us. “The multinationals are moving in and everyone is saying ‘no’.”

Red Electrica, Spain’s main electricity supplier, is a multinational in the truest sense.

Rumours have been rife about the why the €1.4 billion-a-year company plans to install its electricity scheme.

Local residents claim the pylons set to tear their lives apart are transferring solar-generated electricity from Morocco to France, via Almeria.

But the energy giant assured the Olive Press this week that it has ‘nothing to do with taking electricity from Morocco’.

“It’s a project for a region that is not sufficiently connected to the grid,” insisted spokesman Jose Montero.

“It’s true that a number of foreigners will be impacted, but there are thousands of people in Granada demanding more energy.”

But despite Red Electrica claiming they have been down to speak to local residents, the company’s plans do appear to show a lack of care for the area, its history and its current populations.

“I get the impression the rest of Spain view the Alpujarras as some backwards place where the Moors once lived,” Ian told us before he rushed off down the valley to help Michele and the others file the last of the alegaciones forms before the deadline.

This is a view shared by most people who live in the valleys.

And none more so than Chris Stewart, whose arcadia escape now seems destined to become an area many may want to flee from.

“Once again private financial interests are riding roughshod over the will and the rights of the people, leaving as ever a wake of destruction,” he told the Olive Press.

Red Electrica remains firm that the route would not be moved, however admitted ‘minor adjustments’ could be made.

Either way, it confirmed that the thousands of alegaciones will now be studied and more announcements will be made later this year.

In the meantime, the Olive Press has started its first campaign of the year – putting a stop to the pylons in the Lecrin Valley and the Alpujarras. 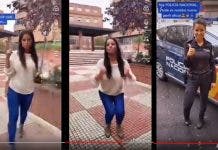 WATCH: Tik Tok used by Spanish police from today to reach teens and the young during pandemic