‘MADRE’ is the new farewell menu of Dani Garcia’s Marbella restaurant that he chose to close less than a month after winning his third Michelin star.

Garcia has revealed that this final menu of his self-titled eatery, which sums up his 20 years in the kitchen, was inspired by his mother.

“Mother represents everything for me,” the 43-year-old Marbella-born cook said.

“For me, mother is undoubtedly who inspired me and woke up in me the love for the kitchen.”

Garcia’s new collection of food will see some of his most classic culinary creations brought together.

Guiding the curation of the new menu was the idea of dishes that have represented ‘an important milestone’ in Garcia’s life.

Among those monumental creations are his ajoblanco with herring caviar and even the ‘BIBO’ burger he came up with for McDonald’s.

Garcia added: “Mother is also my land, Andalucia is the place I was born, and what gave me the culture, and the produce of the kitchen that we use today.”

The celebrated chef made his astonishing announcement in December that he would close Restaurante Dani García. It came just 22 days after receiving his third Michelin star.

Garcia has always been somewhat of a visionary, having achieved his first Michelin Star at the age of 25 – the youngest in Spain at the time to ever be awarded the accolade. 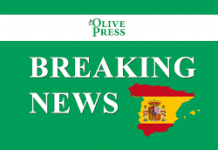