THE Malaga Dog Party will return this weekend for its fifth edition, it has been announced.

Live music, parades, talks, a raffle, dog hairdressing, and a charity race are among the attractions, which centre around the city’s Plaza de la Marina.

On Saturday two canine parades will tour around the city’s main areas, with the aim of raising awareness for dogs that need a permanent home.

Sunday will see dogs go paw to paw for the famous charity race, which kicks off at 11am, and continues through Malaga’s historic downtown area.

This non-competitive event is €5 to enter – the money goes to 10 local dog shelters – and those who want to take part can sign up here.

All entrants will receive a welcome bag of goodies from Tiendanimal, while the company also has stands to educate children on caring for animals.

The Cherry Bomb Rock Band are also on hand to keep the party going, with a live concert in the Plaza de la Marina.

Director of one of the organisers, Marathon Dog’s Manuel Calvo, said the day aims to ‘raise awareness’ of some of the issues surrounding dog adoption.

“We avoid what is known as hot adoption, it is much better that people go to the adoption agency office to formalise the adoption and avoid problems in the future,” he added.

In the Plaza de la Marina 11 different animal shelters will have a stand, in the event that is described as ‘one hundred percent’ about animal protection.

Calvo’s organisation has partnered up with TiendAnimal, Royal Canin, Malaga Town Hall and Diario Sur for the event. 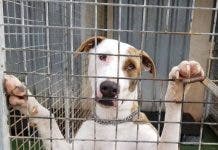 Animal shelter in Spain’s Malaga takes in nearly 1,500 animals so far this year