AN IT meltdown at Gatwick airport has seen 12 flights cancelled and a man heading to Spain trapped beyond the boarding gate.

The control tower was affected for about two hours from around 5pm onwards.

Gatwick bosses today confirmed that one departure and 11 arrivals had been cancelled.

A spokesperson blamed the new cancellations on planes being in the wrong place following Wednesday’s disruption.

It comes as Colin Franks, an EasyJet passenger, travelling to Palma de Mallorca, said he became ‘trapped between the boarding gate and the air bridge’.

He added: “At the moment, everybody is talking to one another and it’s quite cheery. There are a lot of children here.”

It comes after flights were suspended for 30 hours in December at the London transport hub due to drone sightings, which saw 140,000 travellers disrupted. 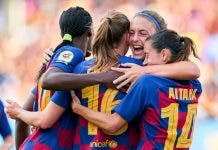 Women’s football season in Spain cancelled, with Barcelona crowned champions and Espanyol staying up despite not winning a single game