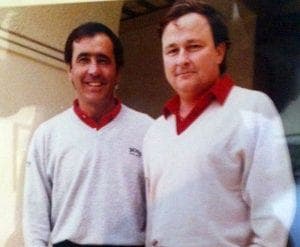 MUCH of James Stewart’s life has hinged around sports.

After batting for the MCC, the Costa del Sol and East Malaysia, he turned his hand to organising golf tournaments.

And not just any competition, mind… the Ryder Cup being one of his scalps, don’t you know.

Indeed, it was Stewart – the boss of Savills in Sotogrande – who helped to ensure that everything went to plan when the globe’s top golfers played at the world’s leading tournament at Valderrama in 1997.

A member of Spain’s most prestigious club for 30 years, he was asked by then-owner Jaime Ortiz-Patiño to help him bring the Ryder Cup to Spain.

Being a long-time member of London’s MCC (Marylebone Cricket Club, for anyone who doesn’t know) certainly helped, as did his international sporting contacts.

“It was a great honour for me and I got to meet some top players,” he says. “Seve was by far my favourite, a true gentleman and ambassador to the sport.”

Luckily for him it all went to plan and he has since teed up with numerous famous sportsmen, including US President George Bush Snr, Prince Andrew and three former England cricket captains.

And when not on the course he occasionally dabbles in selling the odd property here and there.

Joking aside, there is actually nothing that Stewart doesn’t know about property in the area.

“I’ve been in this same office for 20 years,” he jokes. “And while there is no easy transaction and so many issues always popping up, not to mention too many agencies, I still enjoy it.”

While this year is proving to be one of ups and downs, he remains gung-ho about the next decade.

“I am very optimistic about Sotogrande. The last few years have been difficult with the shock Brexit result and the continuing uncertainty but things have recovered relatively quickly.

“The British will definitely be coming back, additionally, the Spanish market is growing stronger as the economy grows and people have more money to spend.”

He believes the renovation of the Almenara hotel this autumn (and news that it will be taken over by a big international brand) will be a great boon for the resort.

He also believes that Sotogrande is slowly moving upmarket towards the glamour and glitz of Marbella with restaurants like Trocodero and The Beach.

“The Ribera del Marlin port area has also really changed things in the port and is buzzing most nights in summer,” he adds.

“There is definitely a change in the air.”