A BRITISH father whose little girl is in hospital on the Costa del Sol after being ‘sucked’ into a pool pump has called it an ‘accident waiting to happen.’

Doctors fear Zara Clarkson, six, from Manchester, may have blood poisoning after her tiny arm was trapped in the pool’s filter pump for more than three hours.

Her father, Zack, 46, battled to keep his daughter’s head above water as firefighters raced to the scene with jackhammers and smashed apart the poolside to free the youngster.

The dad and daughter were enjoying their first family holiday at the luxury villa in Estepona with Zara’s twin sister Lucy and their mum Claire, 42, having only brought the property in the Villas de Santa Maria urbanization at Christmas.

Zara underwent treatment at the Hospital Costa del Sol in Marbella where doctors conducted blood tests to ensure there was no damage to her kidneys.

“Zara was panicking and screamed out ‘daddy the pool is sucking me and it won’t stop’,” Zack, the director of a construction company in Manchester told the Olive Press.

He added: “Something with that kind of suction would have easily pulled a smaller child under the water and they would have been killed.

“It’s incredible her little arm has swollen up so much it is now three times the size.

“What has the doctors most concerned is that the force of the suction may have forced toxins to be released into Zara’s bloodstream.

“The main worry is her kidneys could be damaged.”

Zack said his instinct had been to drag his daughter’s arm out but he stopped knowing this risked causing even greater damage.

Instead, he stayed ‘cheek to cheek’ with Zara keeping her calm as emergency services attempted to saw open the pool’s drainage system.

“She is a brave little kid but of course,” he said, “but it has had an effect on her, she is really upset and has told us she never wants to go swimming again.

“I am a tough lad but my first thought was to go to the corner of the pool and have a quiet sob,” said the distraught father-of-two.

Zara’s mum Claire added: “It was unbearable, I felt helpless and just wanted her out.”

It has been claimed the pool pump had been left on despite reports in the Diario Sur that the pump switch was turned off at the time of the incident.

“It’s so shocking, ” said Tony Reddin, 59, an expat of 30 years and member of the Institute of Swimming Pool Engineers.

“Imagine you’ve got long hair, you’d be sucked in and that’s it, you’re dead,” he told the Olive Press.

“She is lucky to be alive.”

The Olive Press has contacted the Community President for comment. 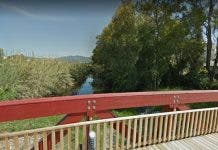