COCA-COLA has been banned from selling Schweppes tonic in Spain.

A court has prevented the Red Parallel company from importing the drink from the United Kingdom and distributing it in Spain.

It comes after a judge ruled the Japanese firm Suntory was the only company with the right to sell Schweppes brand tonics in the country.

Barcelona-based Red Parallel had profited hugely from importing the tonic from the UK and selling it in Spain at a lower price.

“The only thing we did was buy English Schweppes tonic from English wholesalers, therefore merchandise was already in free circulation in the European Economic Area,” said the company following the ruling by the Commercial Court Number 8 of Barcelona.

This sentence has also obligated Red Parallel to pay compensation to Suntory for damages amounting to €293,480.

The tonic Schweppes was born in 1783 but was a late arrival to Spain, only entering the Iberian market in 1957.

The brand quickly became a market leader, with a 54.8% share, and experienced a strong increase in sales as the popularity of gin and tonic soared.

Suntory’s legal director María Rodríguez said: “The rights of the Schweppes brand in Spain are not exhausted.

“The only Schweppes tonic that can be marketed in Spain is that manufactured by Schweppes Suntory Spain or another company of our same group.”

The legal dispute, which began in 2014, looks set to continue with an appeal expected to be launched with Spain’s Supreme Court. 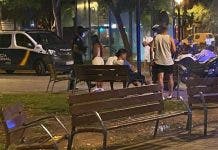