THIS is the moment a Guardia Civil helicopter rescued three people trapped in the house after devastating floods rocked the Costa Blanca.

The survivors were airlifted to safety from the Alicante town of Dolores, which was hit early on Friday morning by floodwaters as electricity and water supplies were severed.

It comes after the Guardia Civil rescued 1,500 people on Saturday alone, according to a statement.

Nearly 4,000 people were in total evacuated from towns in the Vega Baja region as rainfall of more than 300 l/m² struck in just two days.

The city of Orihuela – one of the worst hit – received a record-breaking 425.4 l/m² of rainfall. This is almost twice the annual average of 260 l/m².

A total of 1,100 military personnel were also deployed to bring those hit to safety.

It comes as a British father of two 10-year-olds told the Olive Press how he too narrowly escaped entrapment after floodwaters struck his house in Dolores at 5am last Friday. 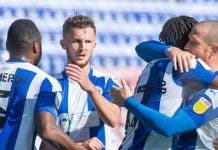