THESE are some of the scenes of alleged unprovoked police violence during protests over the Catalunya issue from the past week.

In the widely shared video, Policia Nacional officers appear to use excessive force against what appear to be peaceful protestors in Barcelona.

One woman is shoved to the floor while another man who is walking calmly appears to be jumped by a group of overly aggressive agents.

“The Spanish police have been repressing Catalunya for 5 days,” wrote Albano-Dante Fachin, who shared the clip on Twitter.

“Every day hundreds of images of violence.

“A very small summary of what is happening in the streets of Barcelona.

“The Government fears that this will be seen outside of Spain. Help us spread.” 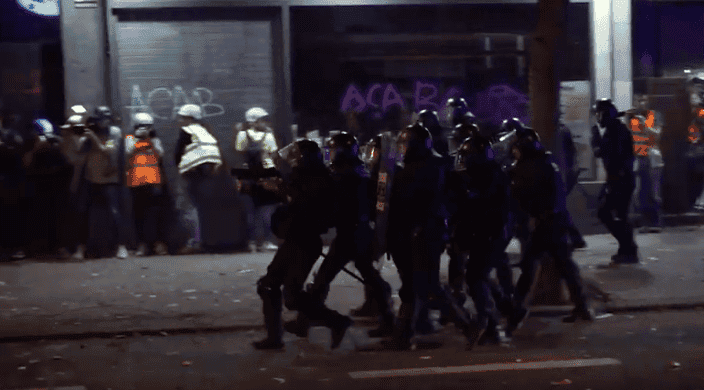 “Spain does not want us to see these images, share them,” another wrote.

Six arrests were made – down from 83 on Friday night – but the smaller demonstration was far from a quiet affair.

The Plaça Urquinaona was again the centre of peaceful demonstrations from 6pm that turned violent after nightfall with phone boxes toppled, bus shelters smashed and a restaurant’s outdoor seating area torched in a bonfire of bins and potted plants.