NEIGHBOURS of a British man gunned down outside his home in an exclusive housing estate on the Costa del Sol say they remain in the dark about yesterday’s shooting.

A day after the shocking events, residents of usually peaceful Calle Orfebres on the Costa Riviera have said that they ‘don’t know what happened.’

When the Olive Press visited the site of the shooting today, neighbours seems reluctant to speak. Most failed to answer their doorbells and remained locked behind electric gates and locked doors.

Three men in tracksuits were stood outside the house washing down the road where the 30-year-old man was killed when we arrived, but they disappeared before we had chance to speak to them.

The British man was shot in broad daylight at around 3:15pm yesterday afternoon while he was parked up in the black Audi outside his CCTV monitored house.

Today, the only reminder of yesterday’s extraordinary events was a sole bouquet of white lilies wedged into a gap in the fence and passing drivers gawking out their windows at the murder spot.

Houses of a similar size in the sought-after neighbourhood between Marbella and Fuengirola have sold for just under half a million euros.

It is the second shooting in the area in less than a week. Last weekend, one man was killed and another was injured after they were gunned down in a nearby urbanisation between Marbella and Mijas. The Olive Press is investigating. 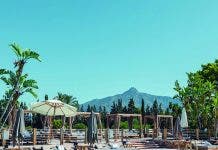 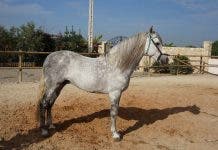