A BRITISH photographer has called for a hosepipe ban on the Costa del Sol, after shocking photos she took show the plummeting water levels at a reservoir.

Michele Brecknell says she has ‘never’ seen the Lake Istan reservoir so low before in the 23 years she has lived on the Costa del Sol.

She now wants the ayuntamiento in the Andalucian town of Istan to impose a hosepipe ban and encourage people to conserve water.

“We should not be washing our cars. People need to be made aware,” she told the Olive Press.

The first photo taken in January shows the lake looking full. By late September when the second photo was taken the water level has reduced so much that the top storey of a derelict house has emerged from the lake’s surface.

In the final photo taken less than two months later the entire two-storey house has surfaced.

“It has happened in about two and a half months– that’s the scariest thing,” Brecknell said.

The 59-year-old said that officials at Istan town hall told her there wasn’t a problem because the lake was 30% full.

“I think it’s a ludicrous attitude to have,” she said. “They say we are waiting for it to rain. We need a hell of a lot of rain to fill that.” 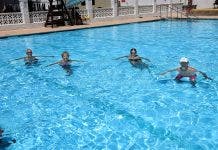 Alex Trelinski - 16 Jul, 2020 @ 17:29
A passenger who flew into Alicante-Elche airport today(July 16) has been taken to Alicante General Hospital after a routine check discovered that...