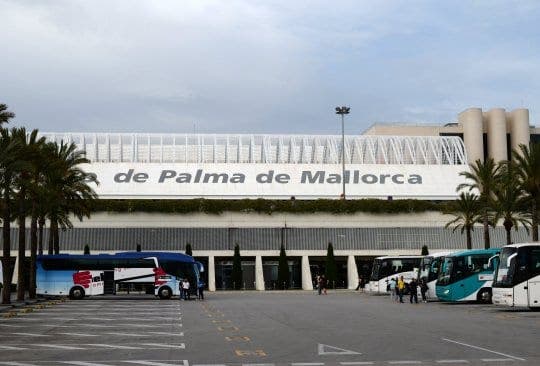 AIRPORTS across Spain have been bracing for Brexit since the chances of a no-deal became increasingly likely last year.

From new barriers to special baggage reclaim areas, hotspots like Palma de Mallorca and Malaga were feared to be among the most affected.

But new director of Palma airport, Tomas Melgar, told reporters on Friday that the infrastructure is ready for ‘all possible scenarios.’

He confirmed that British passengers will not have to reclaim their luggage in a separate area from EU travellers.

Due to the significant increase in travellers coming from outside the EU (post-Brexit Brits), the baggage reclaim is to be reorganised and carried out in one room.

Previously, all non-Schengen and non-EU travellers had to collect their luggage from separate room, known as the ‘bubble’.

Travellers will pass through the same area to leave via the centre of the airport, however they will use a different exit depending on the label attached to their suitcase.

The label will indicate whether or not they are from an EU country.

Meanwhile, Melgar added that an initial ‘provisional solution’ for control of goods in customs will be in place, however he did not reveal more details.

The changes will reportedly be ready by January 31, the due date of Brexit promised by Boris Johnson following his general election victory last week.

Melgar added that the airport will likely introduce a biometric recognition system in the near future.

Meanwhile, director of Malaga airport Pedro Alberto Bendala, last told reporters at the end of October that everything was Brexit-ready.

“From a technical point of view, whether from Security, Immigration or Emigration or from Customs, all issues are resolved…  travel between the two destinations should not be feared.”

It comes after consumer group Which? warned back in February that a no-deal Brexit could add an extra 90 seconds per passenger at popular EU destinations.

The group’s study found that an average of 201 hours of additional immigration checks would be required every day at the airports if the UK withdraws from the EU without an agreement.

Which? said it was concerned that Spain had yet to reveal any concrete plans to tackle the additional immigration checks.

In Malaga and Palma de Mallorca, at least according to their respective directors, such plans are now in place.