A GANG that sold powerful impotency drugs as ‘natural remedies’ in Spain and the UK has been busted.

Potential side effects of the substance the ring flogged, includes heart attacks, strokes and death.

Police in Spain said the unscrupulous criminals plied their trade, despite knowing of the dangers the drugs posed.

Consumers in Portugal, Italy, France, Germany and Russia were also targeted via a series of websites.

Knowing the drugs could only be used under medical supervision, the gang described and marketed the products as ‘natural energisers.’

This was to get around customs controls and avoid scrutiny from the health authorities when they imported the drugs from Malaysia.

This put the public at risk, as the active ingredients included Tadalafil and Sildenafil, intended for the treatment of erectile dysfunction.

Due to the mislabelling, people susceptible to the possible side effects of these drugs – which include palpitations, irregular heart beats and burst blood vessels – would not have known of the peril posed.

A total of 400 Policia Nacional, Guardia Civil and tax agency officers were involved in the operation.

They arrested 47 people during 12 house searches and 55 inspections of sales points.

Thirty-nine bank accounts, including two abroad, have been blocked.

As well as on the internet, the products were sold in gyms, herbalists and sex shops in Madrid, Alicante, Gerona, Barcelona, Tarragona, Valencia, Almeria, Jaen, Granada, Sevilla, Malaga, Leon, Salamanca, Valladolid and the Canary Islands.

One of the alleged ringleaders has been arrested in Dubai, United Arab Emirates, where he was allegedly running the whole scam and hiding from three International Arrest Warrants.

The 47 detainees – all Spanish except for one Portuguese – are charged with crimes against public health, membership of a criminal organisation, fraud, smuggling and money laundering. 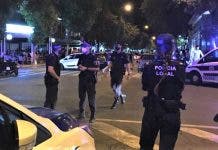