THE crash that killed Argentinian Premier League star Emiliano Sala was caused by the aircraft flying too fast for its design according to the investigation released yesterday.

The football star who started his career in the Spanish youth side San Martín de Progreso, was killed after the Piper Malibu he was travelling in crashed in January 2019 while travelling from France to the UK where he was about to sign for Cardiff City for a record €17 million.

It was discovered early on that the amateur British pilot David Ibbotson, was not trained to fly at night and in adverse conditions and had limited previous experience in instrument reading.

It was reported that the aircraft encountered severe weather conditions off the coast of Guernsey and whilst trying to manoeuvre, parts of the aircraft broke apart under the strain and it fell into the sea.

According to the report by the The Air Accident Investigation Division (AAIB) the pilot ‘lost control of the plane during a manual turn’. Crispin Orr, the division’s chief inspector concluded: “A loss of control was more likely because the flight was not carried out in accordance with the safety regulations applicable to commercial operations.

“This manifested itself when the flight was operated under the Visual
Flight Rules (VFR) at night in adverse weather conditions despite the fact that the pilot had no training in night flight and a lack of recent practice in instrument flight.”

Also included in the report was the likelihood that the pilot suffered slight effects of carbon monoxide poisoning as there was no detector or appropriate safety features fitted to the aircraft.

It was also discovered that both the aircraft and the pilot did not own the appropriate licences to fly, and was apparently rented as a so called ‘grey charter’ where both the renter and the pilot knew of the lack of safety features of the aircraft but allowed it to be chartered regardless.

‘STAY HOME!’: COVID-19 can infect and kill any one of us, says president of Spain’s Andalucia as he warns of potentially tougher restrictions in... 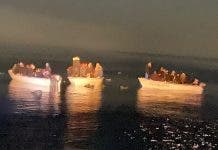 Laurence Dollimore (Digital Editor) - 30 Oct, 2020 @ 16:41
The Partido Popular leader made the comments this afternoon after the southernmost region counted more than 5,000 new cases for the second day in a row, along with 44 more deaths