SPAIN is cornering one specialised sector of the art market. But it’s not a niche that brings universal approval and runs the risk of making Spain a laughing stock in the eyes of art purists around the world.

It is the grotesquely incompetent restoration of classic religious icons that see beloved pieces turn into internet memes for bored Generation Z workers in the blink of an eye.

The latest ‘restoration’ – or cultural vandalism, as some have commented – comes in the form of an early-20th century neo-Renaissance sculpture adorning a bank in Palencia, just north of Valladolid.

Where once a beautiful maiden surrounded by God’s creatures smiled serenely down on citizens from her lofty position, now those looking heavenwards are greeted by what appears to be Mr Potato Head.

Meme peddlers have cruelly been drawing comparisons between the ‘restored’ sculpture and the 45th president (we can’t yet say the outgoing president since he is having a toddler tantrum and refusing to accept his fate), Mr Orange, or Donald Trump as some know him.

Local artist Antonio Guzmán Capel published images on Facebook in horror, saying: “The pictures are a bit blurry, but you can see the mess perfectly well,” adding “It looks like the head of a cartoon character.”

He noted that now Palencia had a claim to fame to rival that of Borja and its ‘Monkey Christ’ that brought international headlines eight ears ago when a devout octogenarian parishioner took it upon herself to ‘restore’ a fading icon of Christ, turning the place into a laughing stock.

Said Guzmán, “I’m sure whoever did it got paid for it.

“But the bigger crime was committed by the person who commissioned it and then tried to carry on as though nothing was wrong.”

The list of international embarrassments just keeps on growing. As well as Mr Potato Head and Monkey Christ, we have also seen Tin-Tin St George, Fluorescent Virgin and Child and the heinous Lady Gaga Madonna.

Spain restoration community are outraged: “THIS #IsNotARestoration,” Spain’s Professional Association of Restorers and Conservators said in a tweet.

In case we missed the point, they spelt it out: “It’s NOT a professional intervention.”

Whatever the artistic merits of the restoration in Borja, it’s turned out well in economic terms.

After the botch and bodge in 2012, more than 50,000 people visited the small church to see the mess with their own eyes.

“Thousands still visit the church every year and a small museum has sprung up where people can buy Ecce Homo key rings, T-shirts, teddy bears and mugs.” notes the Guardian, adding “As well as employing two caretakers, the church-museum also yields revenue that is used to help fund places at Borja’s care home for the elderly.”

It seems that it really is an ill wind that blows nobody any good. For ham-fisted restorers across Spain, the future’s bright… the future’s orange. 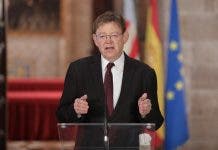