POLICIA nacional have reported that 1,500 fines have been handed out in Malaga in the last week for failure to comply with COVID-19 measures.

The entry into force of the perimeter closure of Malaga from 00.00 hours on January 20 has led to this increase in sanctions compared to the previous week, which did not reach a 1000.

According to official reports an average of 100 people a day are fined for not wearing masks.

The day with the highest incidence of people fined for not wearing the mandatory face mask was last Friday, when 153 fines were handed out.

Mobility restrictions between municipalities and provinces, during the same period, from January 19 to January 26, have seen 603 people fined, with Friday once again being the day when more fines for this infringement were handed out, 52 in total.

A further 211 complaints have been made during this last week for breaking the curfew, currently set at 10 pm.

In a statement issued by the Malaga Policia Local, they say that despite the large number of fines handed out in the city, ‘the numbers should not tarnish the responsible and appropriate behaviour shown by most citizens.’

Additionally they say they will ‘continue their work with the utmost diligence and professionalism to ensure compliance with the preventive measures implemented to combat COVID-19.’ 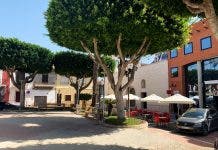