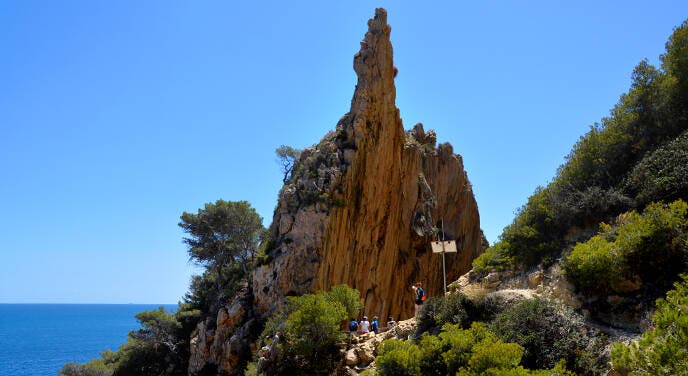 ONE of the largest and most significant geological areas in the Valencia region is set to be officially classified as a ‘Natural Monument’.

La Falla del Moraig(Moraig Fault) will get added protection once the procedure has been processed and approved by the Valencian Government’s Agriculture department.

It’s popular with tourists who can access a 219 metre long path with spectacular sea views of the Benitatxell area on the northern Costa Blanca.

La Falla del Moraig is in effect a spectacular rocky wall and is an example of a fault that runs parallel to Cala del Moraig.

It runs through the Cova dels Arcs and reaches the sea.

The polished appearance of the rock wall and the grooves formed by the friction of the blocks indicate the direction of geological displacement that originated it.

The fault seems to be suspended in the air over a lagoon which also houses the underwater entrance to the Blanc river.

Valencia’s Agriculture Minister, Mireia Molla said: “La Falla will get the right kind of protection that will be tailored to all of the challenges of conservation.”

The area is already classified as a ‘Place of Geological Interest’ by Spain’s Geological and Mining Institute.

Experts say that the fault was created 11 million years ago which sank mainly limestone material to form the Cueva des Arcs.

Erosion over the years then created areas like the Moraig Cave