WAKING up on the summit of El Lucero is a little like having a ringside seat at the birth of the world.

As the dawn sky shifts from purple to gold, you glimpse the mountains of Africa rising on the horizon above a silver sea.

To the north pine forests swim in the mists of Granada province, while below stark crags thrust up from dark valleys to catch the first light of day.

Here and there a column of smoke reaches up from a faraway farmhouse or hamlet.

You are high above the Axarquía, the 988- square-kilometre corner of Malaga province.

And El Lucero, a limestone buttress soaring 1,700 metres above sea-level, is as good a place as any to appreciate this region’s natural grandeur.

The ruins of an old Civil Guard post provided sparse shelter for the night I spent atop the mountain in order to research a book on the region.

They are the relics of a bitter struggle in the 1940s and early 1950s when guerrillas vainly tried to undermine the Franco regime. 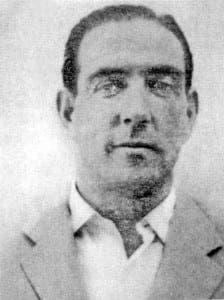 Their leader was a ruthless, charismatic character named El Roberto and legends about him and his band still circulate among the villages of the Axarquía.

For quite a while after his rebellion was crushed, not a lot happened in the Axarquía (from the Arabic sharquiyya, meaning the eastern zone).

While tourists began flocking to Torremolinos and Marbella, it slumbered. Poor communications meant the Costa del Sol Oriental (the coast east of Málaga) was largely bypassed by travellers.

And that’s the good news.

For this zone largely avoided the worst aberrations of the development boom. Mass tourism has not swamped it and the jetset has focussed on other parts, thank goodness.

One hopes the mayor of Frigiliana, one of the least-spoilt villages, took to heart the words of King Juan Carlos when he visited in 1998. Highly impressed, he commented: “You have a very pretty pueblo. Do everything to conserve it.”

When I first came here, stepping off the bus in Nerja one December when fewer than a dozen foreigners were wintering in the town, land was selling at two pesetas a square metre and wine was 10 pesetas a litre.

Great, for the visitor. But not for the locals.

A medieval life style prevailed. The nearest hospital was in Málaga over a potholed road and ambulances and dentists were unknown.

No longer. These days the Axarquía is truly part of the 21st century, with all the amenities you could expect — and all the pros and the cons.

Ancient vines and olive groves have been uprooted to make way for urbanisations and villas. Hundreds of old farmhouses and village dwellings have been renovated and thousands of north Europeans have either bought second homes or arrived to live permanently under the sun.

Along the coast apartment blocks have sprouted where once the main crop was sugar cane. Cane was king for 1,000 years, but the last refinery on the coast closed in 2006.

Fortunately, although concrete has scarred parts of the coast, inland the Axarquía is still an escapists’ paradise of sleepy villages and dramatic sierras.

By far the largest town is Vélez-Málaga, praised by Ibn Battutah, greatest of medieval Arab travellers, as “a beautiful city with a fine mosque and an abundance of fruit trees”.

Although now surrounded by modern development, the old town is well worth visiting — Cervantes passed this way as a tax collector and mentions Vélez in his epic Don Quixote.

Nearby is Torre del Mar, once a huddle of poor fishermen’s dwellings. According to one story, things took off when a local builder built apartments to house a string of Málaga businessmen’s mistresses.

Soon after, the Germans started buying and scores of apartment blocks now line the seafront. Decent amenities were a long time in coming, but the town has spruced itself up, with an excellent promenade and decent eating possibilities. And now Spanish visitors flock in too.

Just along the coast, the first language at bars and restaurants along the Torrox-Costa seafront would appear to be German.

Torrox insists it has the best climate in Europe, although its neighbours, such as Nerja, are inclined to argue the point.

One thing it can legitimately claim: it stages one of the coast’s biggest annual beanos. On a Sunday in mid- December tens of thousands scoff vast quantities of migas, a belly-filling dish served with
torrents of Moscatel wine. 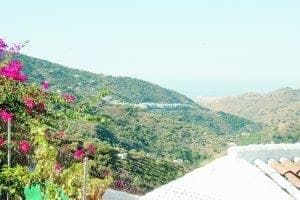 In autumn you will see grapes laid out to dry on paseros, earthen beds facing south.

No wonder the wine is compared to bottled sunshine, which you can verify by attending Cómpeta’s celebrated wine festival in August.

Be sure too to try the raisins, a luscious, mouth-watering experience.

For an idea of the work involved in producing them visit the Museo de la Pasa in Almáchar.

On January 12, 1959, five local boys discovered these vast caverns with amazing rock formations and traces of Paleolithic man. General Franco himself came to view this phenomenon. Today in
Andalucia only the Alhambra in Granada draws more visitors.

The rest of Spain finally woke up to Nerja’s attractions when Verano Azul, a popular TV series, was filmed there. Talk about a reality show — when Chanquete (an old fisherman in the series) died, Nerja ayuntamiento flew its flag at half-mast. And today an oil painting of Antonio Ferrándiz, who played the part, hangs in the town hall.

Often you will hear more English than Spanish in Nerja.

Back in the Napoleonic Wars the British bombarded Ner-ja’s fortifications into rubble, but the locals don’t hold it against them. Brits run many local businesses and are the mainstay of tourism.

Without doubt the most spectacular scenery along the Costa del Sol lies beyond Nerja.

From the town’s Balcony of Europe you gaze at mountains which tumble sheer into the azure Mediterranean. Lofty headlands conceal secluded beaches and the area is now protected as a marine sanctuary, great for snorkelling.

But, for me, the best part of the Axarquía is to be found inland. Here lies the Spain where my wife and I, after working around the world, finally discovered the ideal place to unpack our bags and take up residence.

As we’d dug our way out of dust traps on the tracks of the Outback, as we’d struggled through the crowded streets of Hong Kong, we’d dreamed of an easy-going place in the sun where we could unwind.

Like many other expatriates, we found the ideal spot. What matter if the toilet was only a hole in the ground, the roof beams were near to collapse and the house could only be reached up 40 or so cobbled steps.

It was autumn and there is no sight more attractive than the cubist dwellings of the Axarquía bathed in that golden light. The one we found looked down on a mosaic of carefully tended fields, irrigated by channels first built by the Moors. To the rear rose the precipitous slopes of the Sierra Almijara.

Each of the region’s 31 communities has its charm and a history often more eventful than you may imagine. 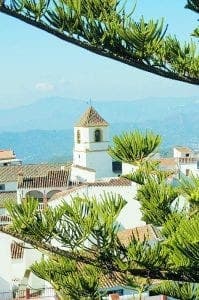 Take El Borge, population 1,000, famed for its raisins and as the birthplace of El Bizco, a blood-thirsty, oneeyed bandit (his old home is now a hotel and restaurant).

Unusual street names reflect the fact that today’s mayor is a little to the left of Mao Tsetung.

They recall the days when it was known as Little Madrid, thanks to the Gálvez family who achieved power and wealth and aided the USA’s fight for independence.

Riogordo is the place to be on Good Friday and Easter Saturday.

You are likely to meet Roman centurions strolling down the main street and Galician shepherds refreshing themselves in a bar. Hundreds of villagers take part in the annual Passion Play.

Meanwhile In Puente don Manuel you can find just about every British luxury and necessity in its hive of expat businesses.

Beyond the villages and cultivated valleys rise the heights of the Tejeda and Almijara sierras, forming part of a 40,000-hectare nature park.

Once mule trains, charcoalburners, smugglers and wood-cutters trod the paths through the mountains.

Now they are largely deserted, except for hikers, bikers and bird-watchers.

The last wolf disappeared a century ago, but you can catch glimpses of mountain goats, wild boar, foxes and other wildlife amid these tortuous ranges.

Maroma, the highest peak in Málaga province at 2,068 metres, is often wreathed in cloud, in winter sheathed in snow. In the past neveros (snowmen) would pack the snow in esparto baskets in summer and bring it by mule to the coast to use for refrigeration.

For malagueños, hiking to Maroma’s summit is something of a pilgrimage. Quite a number trek up at the summer solstice to enjoy the dawn (best to be fit and well-equipped).

Just to confirm that you have made the right choice in coming to the Axarquía, a plaque at the top records: “This mountain is the centre of the world./This mountain like any mountain is a sacred place./That’s why you are here…”

David Baird is the author of several books relating to the Axarquía, including East of Malaga — Essential Guide (Santana Books), Sunny Side Up — The 21st century hits a Spanish village (Santana), and Between Two Fires — Guerrilla war in the Spanish sierras (Maroma Press). More information HERE